Britain's Most Popular Food & Drink - The Camping and Caravanning Club

Jam-packed with home-grown produce and goods, it’s time for foodie fanatics across Great Britain to join together and celebrate the best of British food and drink. 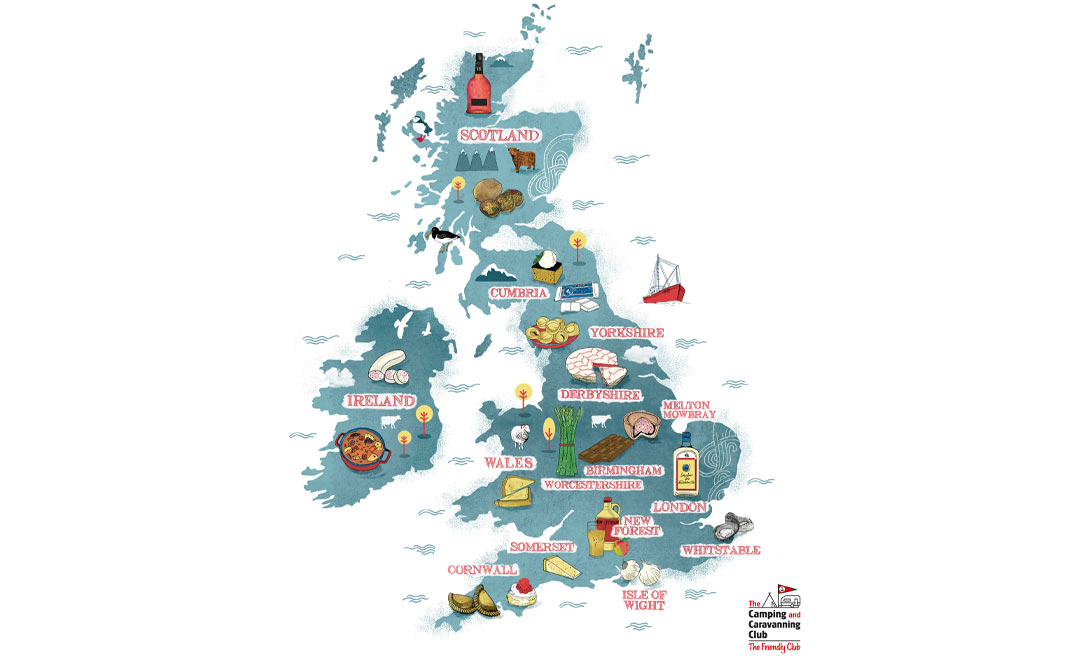 1. The Garlic Farm, Isle of Wight

You can find everything from garlic flavoured beer to chutney and pesto at The Garlic Farm in Newchurch. Just a 10-minute drive from our Adgestone Club Site, the shop and restaurant are open seven days a week.

Cromer Crab is famed for being the best in the UK thanks to the pure, nutrient-rich water along the Norfolk coast. Cromer beach is just 10 minutes away from our West Runton Club Site, visit The Crab Pot Café or The Jetty Café for great fresh crab sandwiches.

For cheese lovers, a visit to Somerset isn’t complete without sampling some of the regions finest. From our Cheddar Mendip Heights Club Site it’s about a 10-minute drive to The Cheddar Gorge Cheese Company, the only cheddar producer left in the village. The working dairy and shop give you the chance to look at the production process and to purchase award-winning cheeses.

Created as a by-product of dairy farmer’s reducing waste from their milk, this is a thick and indulgent cream. Clotted cream is often enjoyed with a scone and either jam or treacle as an accompaniment. Remember that in Cornwall, its jam or treacle first but, in Devon, its cream.

Traditionally filled with a mixture of beef, potato, swede and onion these golden shortcrust shells are regarded as the national dish of Cornwall. Nowadays there are endless filling variations available, be sure to take a Cornish pasty pit stop on your travels.

The tea gardens at Tregothnan were established in 1999 and in 2005 the estate contributed to the first sale of truly “English Tea” in the UK. Many varieties of Tregothnan tea are available to buy online including Manuka, Red Berry and English Breakfast Tea.

Gin held a significant place in London’s history books with The Gin Craze in the 18th century. Today, the popularity lives on, with many distillers and gin lounges going strong in London. London Dry Gin is enjoyed globally, flavoured using only natural plant materials.

According to the history books, 50,000 people queued up to buy one of these buns on the day they went on sale by the Old Chelsea Bun House in the 18th Century. Cinnamon, currants, lemon peel, brown sugar and butter are combined with enriched-egg dough to form a gloriously sticky baked treat. Visit Borough Market to pick up a freshly baked bun.

Whitstable is famed for its shellfish; specifically, it’s oysters. Harvested for centuries, you’ll struggle to find a fresher oyster than those available in the medium-sized seaside town on the north Kent coast. It’s around a 20-minute drive to Whitstable from our Canterbury Club Site.

Apple orchards were established in England by the Romans and cultivated ever since. In the New Forest, cider making was a way of life for the New Forest Commoners, and the tradition has carried on through the ages. Today there are several popular breweries to visit around the New Forest including Ringwood Brewery where you can take a tour and visit the shop. It’s less than a 15-minute drive to Ringwood Brewery from our Verwood Club Site.

Those visiting Bakewell should head to The Old Original Bakewell Pudding Shop to purchase the popular treat. On offer, you’ll find Bakewell pudding, made with puff pastry as well as the traditional Bakewell tart. The shop is just under 15 minutes away from our Bakewell Club Site by car.

There are thousands of beer breweries across the UK. One of these is Buxton beers, situated in a historic Old Court House dating back to the mid-1800s in the centre of Buxton. The Tap House serves food as well as an extensive list of beers from around the world.

Littleover Apiaries in Derbyshire is just one of the UK’s leading honey suppliers. We recommend checking whether there's a local beekeeper near you or your campsite.

A pork pie shop so popular it has its own signpost, Ye Old Pork Pie Shoppe has been up and running since 1851. Hot water crust pastry is hand raised to create the famous pie which is filled with pork and jelly before being cooked without a mould, resulting in its distinctive shape.

Around a 20 minute drive away from our Clent Hills Club Site, you can learn all about the history of Cadburys and sample a few sweet treats along the way. Milk Chocolate, Milk Tray and Bourneville Chocolate (named after the location of the factory), are just a few treats invented at the factory in Birmingham.

Birmingham is the original home of the Balti. A Balti is a curry, cooked with the meat off the bone and a variety of spices. Shabab, Al Frash and Adil’s are all within the triangle and come highly recommended.

If you’re camping in Yorkshire a visit to Wensleydale Creamery (the only place to produce true Wensleydale cheese) is a must. View cheese making demonstrations, visit the child-friendly museum and browse the gift shop where you can choose from over 20 varieties of handcrafted cheese.

Originally called “dripping pudding”, these savoury boats of baked batter are the perfect accompaniment to a Sunday roast. In Yorkshire, you’ll often find pub menus include a giant Yorkshire pudding filled with sausages, mash, peas and lashings of onion gravy.

Visit Crofts Chocolate in Scarborough to buy a treat from the family run business. Choose from gifts, infused shards and an endless variety of truffles and chocolates. A great place to visit if you're camping on our Scarborough Club Site.

Founded in 2004 by Belinda Williams with the help of her husband Terry, Provender Soup creates imaginative twists on classic flavours. Look out for them on a supermarket shelf near you.

Yorkshire puddings aren’t the only food enjoyed with gravy throughout the north. Chip shops in the north offer gravy as a popular sauce. Don’t knock it till you try it.

Discovered after a batch of glacier mint sweets went wrong, Kendal Mint Cake is popular amongst walkers and climbers. The energy boosting snack is still produced and sold today, providing a sweet treat on long walks from your campsite.

Topped with sliced potatoes, this is a deliciously warming, traditional slow-cooked stew. Traditionally a hotpot is made with lamb or mutton, but there are many regional variations.

Traditionally served with vegetables, tatties and neeps (mashed turnips) the crumbly sausage like meat mix is an integral part of any Burns Night supper. Haggis is made of oatmeal, suet and seasoned sheep offal. Not for the faint of heart but well worth a try for an authentic flavour of Scotland.

Seasonal berries, oats, whisky and crowdie (a type of cream cheese, sometimes substituted with double cream) make up this delightful Scottish dessert. There are variations and debate over which ingredients make a true Cranachan, but any combination of the above sounds good to us.

Whisky is Scotland’s national drink. Taxes were imposed on Whisky 1644, and by 1780 there were only around eight legal distilleries. Today there are just over 100 distilleries in Scotland producing their variations of Scotch Whisky. There are three types of whisky to look out for:

Made from flour, sugar, milk and butter, Welshcakes can be best described as a mix between a scone and a biscuit. Currants, nutmeg and cinnamon, are popular variations. Welshcakes are cooked on a griddle, not baked and eaten cold, usually on their own.

For this Welsh classic, cheese sauce is poured over slices of toasted bread. Mustard, Worcestershire sauce and paprika are often added to the mix for added flavour. A delicious variation on the usual cheese on toast.

A variety of stewed vegetables and meat, native to Ireland, this warming stew is great after a day of exploring the Emerald Isle. Potatoes, carrots, onions and lamb are common ingredients. Some may even include mutton.

Also known as oatmeal pudding, this favourite is similar to black pudding but doesn’t use blood as an ingredient. Usually, suet is combined with oatmeal, breadcrumbs and pork in a sausage casing. Just like with black pudding, white pudding can either be cooked whole or sliced and grilled.

Historically soda bread was the product of a bare cupboard, but the same simple recipe is as popular today as it was hundreds of years ago. Flour, baking soda, soured milk and salt are combined and baked in a variety of shapes.

Guinness is probably one of the most well-known products from Ireland; Arthur Guinness started brewing Ales at the St James’s Gate Brewery in Dublin in 1759. Today you can go and stand in front of that brewery and take a tour in the factory next door, giving you the opportunity to try Guinness within a few metres of where it’s been brewed.

There are endless eateries and shops you can visit to sample the items listed above. With over 100 Club Sites to choose from you'll never be short of new places to eat and explore.  Did you know that if you join the Club you can benefit from up to 30% off Club Site fees whilst exploring the UK?

Note: Travel times may vary depending on mode of transport and traffic conditions.