Towing with a Motorhome 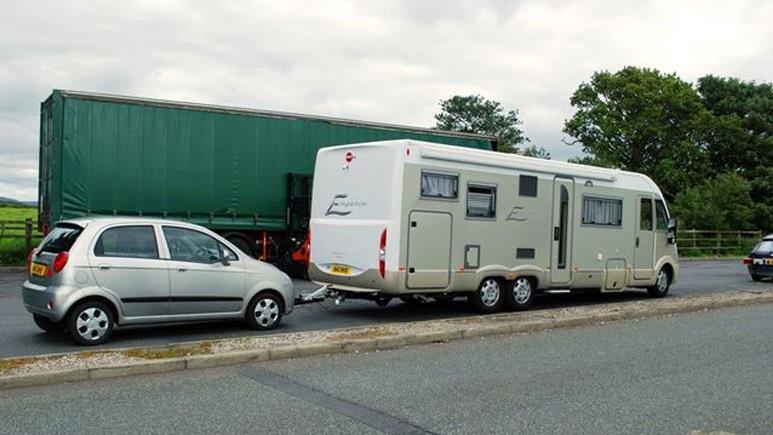 Towing behind your motorhome

For many campers a significant choice is whether to tow a caravan or drive a motorhome, but towing with a motorhome can often enhance the enjoyment of using your vehicle. While a VW campervan provides a terrific daytime base, for some its accommodation is too cramped for the evenings, but with a small caravan in tow you can be comfortable at the campsite while still enjoying the benefits of a daytime base anywhere. At the opposite end of the scale, a large motorhome is fine on the campsite but its size is limiting out and about. Tow a small car to the campsite and your daytime roaming knows no bounds. Alternatively if you wish to take a small boat or canoe on your travels a small trailer can make that possible.

So there are many good reasons to tow, but there are also some drawbacks concerning reversing, reduced speed limits and the detailed legal constraints of towing a trailer. This Data Sheet is intended to raise awareness of the issues involved in towing. Benefit from free tow-matching and expert advice when you join the Club.

Matching a trailer to a motorhome is similar to that of car and caravan. You need to ensure you operate within the capability of the towing vehicle and the conditions of your driving licence. Details of such matching can be found on the Club's guide to Matching Car and Caravan.

You'll find an explanation of the various vehicle weight terms used in the text in the definitions panel. Please note also that the legal term for a motorhome is - motor caravan -, though we use the more commonly used term (motorhome) here.

With a luggage trailer or caravan, noseweight can be adjusted to (or close to) the desirable weight by relocating kit fore or aft of the trailer axle. Where trailers are used to carry one large item such as a boat or car it is best to have a purpose-made trailer where the trailer axle is located to give a desirable noseweight with that fixed load.

Whatever you tow, whether a normal trailer or car using an A-frame, you will need to ensure you have a good towbar and towing electrical system fitted. If you have a relatively recent motorhome it is likely to have been the subject of European Type approval and as such must have a type-approved towbar fitted. Before buying a trailer check to confirm that a suitable towbar is available for your motorhome. 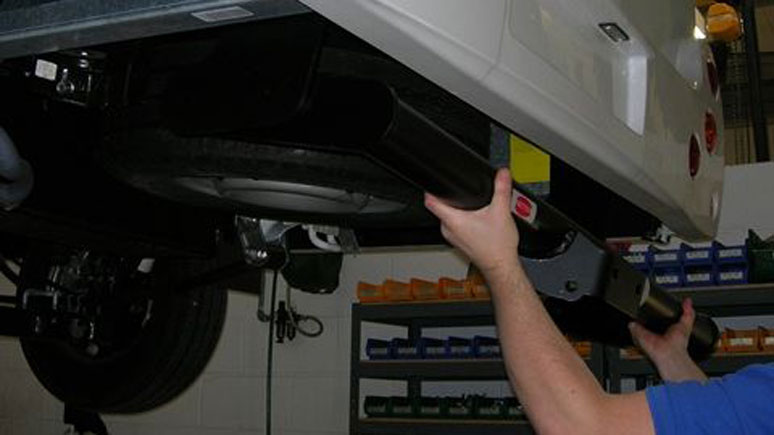 Sometimes there can be complications with underslung water tanks or other equipment impeding the satisfactory fitting of a towbar. A towbar fitter specialising in motorhomes is therefore recommended, especially where a chassis extension or towbar needs to be fabricated for the particular requirements of your motorhome.

When towing you are automatically restricted to a maximum speed of 50mph on single carriageways and 60mph on dual carriageways and motorways, except where a lower general speed limit applies. Also you are not permitted in the outside lane of a motorway where there are three lanes or more.

The Road Vehicles (Construction and Use) Regulations limits you to towing an unbraked trailer with a MAM not exceeding 750kg or half the kerbweight of the towing vehicle, whichever is less. Where a trailer is fitted with brakes, even if the trailer does not exceed 750kg, those brakes must work properly.

Vehicle manufacturers also quote towing limits and these are normally given in the vehicle handbook. If only one towing limit is given assume it is for a braked trailer. The best way to check the braked trailer limit for a motorhome is to inspect the weight plate on the vehicle. The weight plate, which usually also carries the vehicle's Vehicle Identification Number (VIN), is normally located under the bonnet or on one of the door pillars. 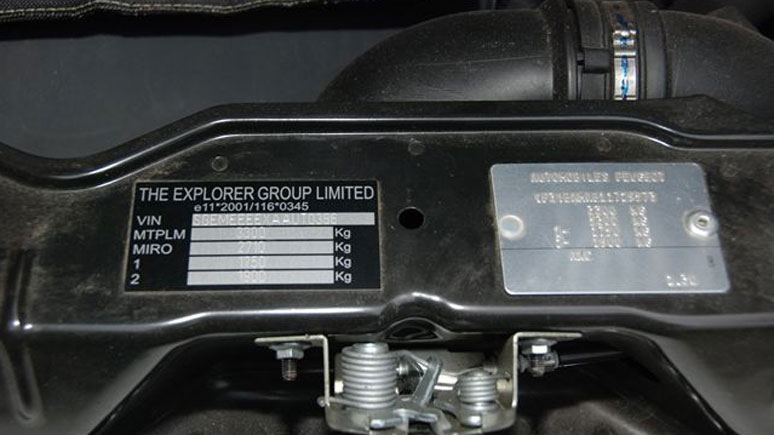 For coachbuilt motorhomes be sure to use the convertor's plate (or AL-KO plate where the base vehicle rear chassis has been substituted with an AL-KO chassis) in case the original specified loadings as indicated on the base vehicle manufacturer's plate have been amended. The top figure on the plate is the vehicle's Gross Vehicle Weight (GVW) and the second figure down is the gross train weight (GTW). The GTW is the maximum combined weight of towing vehicle and trailer that is permitted. The difference between the GTW and GVW is your towing limit when the vehicle is fully loaded. 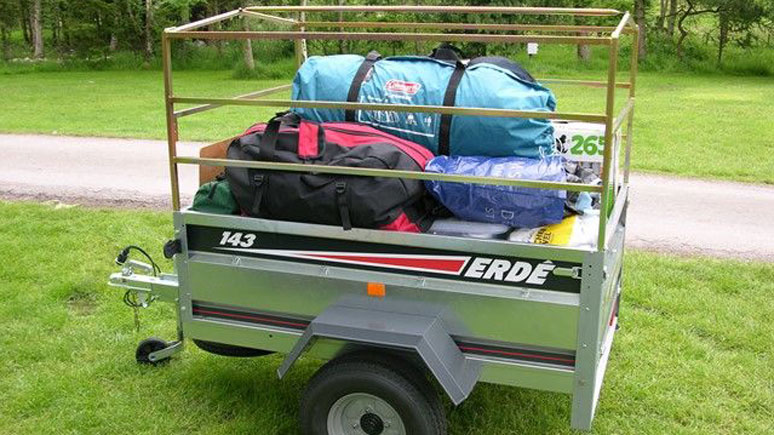 Towing a car using an A-frame

The law when towing a traditional trailer is reasonably clear throughout Europe. But tow a car behind a motorhome using an A-frame or dolly makes the situation less clear.

There has been some debate around Directive 71/320/EEC and UNECE Regulation 13 concerning braking system type-approval, however this only relates to new vehicles. Motor vehicles and trailers are within the scope of these technical regulations but A-frame devices are not.

The Department for transport (DfT) states - There is no harmonised EU legislation concerning the type-approval of A-frames and they cannot be considered as vehicles in the context of the legislation as they merely form a link between two vehicles. However, for many years the DfT was clear that the use of devices such as A-frames, spectacle lifts and dollies were intended only for the purposes of recovery of broken down vehicles.

The DfT's guidance for A-frames was updated during 2018 and it made clear that the temporary attachment of an A-frame makes it and the car into a single entity and due to it being constructed for towing, it is a trailer.

The DfT also makes it clear that the activity of using an A-frame in the UK is legal as long as the technical requirements for a trailer are met fully.

They also make it clear that this is for the UK only, other countries will have their own rules and the Vienna convention on road traffic may not offer cover to the activity abroad. 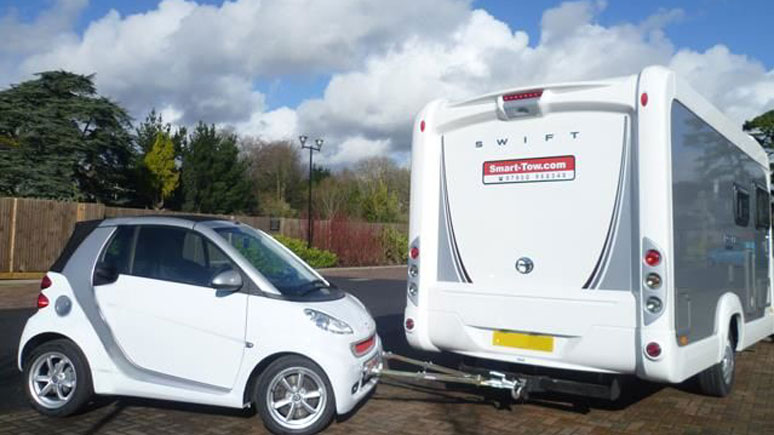 The Club strongly advises you abide by the local laws for each country you travel through. In practice this means putting the car on a trailer when outside the UK.

A number of Club members towing with A-frames on the continent have been stopped by local police. In several cases in Spain, police officers have insisted on the decoupling of the A-frame and separate travelling, so be prepared for your partner or travelling companion to drive the car if requested.

Lighting is one issue that can be largely resolved by a connection to the motorhome electrics so all the car's normal road lights function correctly. The regulations require a trailer to display two red triangular reflectors - which are often overlooked - and also to display the number plate of the towing vehicle. 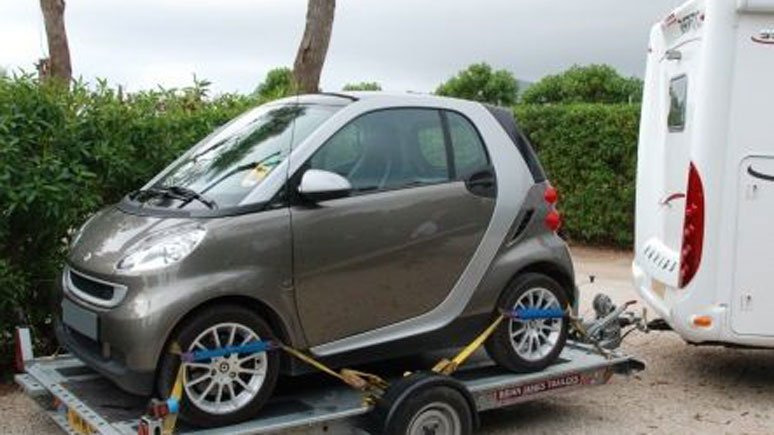 Braking requirements are not so easy to comply with, particularly when an A-frame system uses a relatively simple overrun (also known as an inertia) braking system, as used on caravans, to operate the car's brakes. The DfT comments on this: Where a remote device is used to actuate the brake pedal of a trailer (including a car and A-frame assembly), the actuation device must be properly designed to ensure that the braking performance of the towed vehicle is suitably controlled to ensure the safe and stable braking of the vehicle combination (the towing vehicle and the trailer).

There are also concerns about the ability to reverse a car on an A-frame when using an inertia braking system. Traditional braked trailers can be reversed without problem because they have auto-reversing systems in the wheel hubs that enable the brakes to collapse when rearward motion is instigated. Cars do not have such systems. The DfT information sheet states: From 1 October 1988 the inertia braking system was required to allow the trailer to be reversed by the towing vehicle without imposing a sustained braking drag. Devices used to fulfill this requirement must engage and disengage automatically. This applies to A-frame that employ inertia overrun technology. 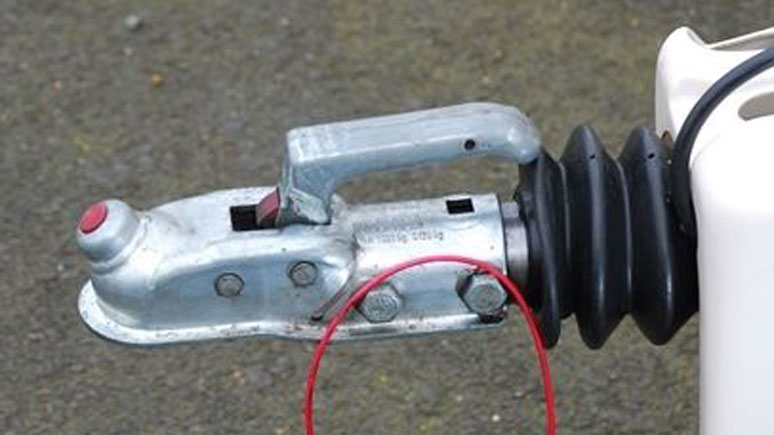 More recently some A-frame suppliers have implemented designs to operate the car's braking systems, including the power assistance system using electrical power from the towing motorhome. Suppliers claim these electrical systems provide the required braking efficiency and allow trouble-free reversing as the car's braking operation depends on the motorhome's brakes. 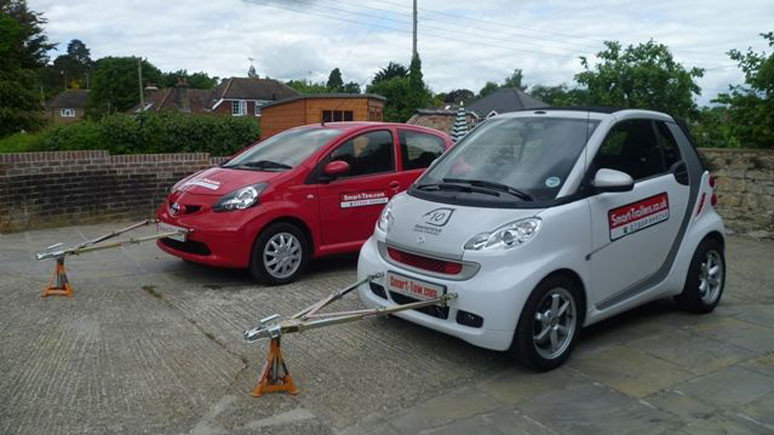 To avoid all the above technical problems relating to braking requirements, some campers have argued the braking requirements for A-frame towing of cars can be avoided by using a lightweight micro car where the GVW does not exceed 750kg. The argument goes that with a GVW (including A-frame) of less than 750kg, the unit can be considered as an unbraked trailer. However, if a braking system is fitted then the regulations require all the brakes to operate correctly and the micro car will have brakes. The DfT also raise a concern about the latest technology in brakes including electronic stability control (ESC) and regenerative braking technology where it may not be suitable for use with an A-frame.

While the DfT has set out its interpretation of the regulations, it makes it clear that any interpretation of the law as this is a matter for the courts to decide. As far as the Club is aware, no one has yet been taken court in the UK for towing a car using a braked A-frame. As there is no mandatory testing regime in place, it is down to individual manufacturers to ensure their products meet the statutory requirements. If you decide to purchase an A-frame it would be wise to seek written assurance from your supplier that it complies with the regulations as laid out by the DfT. 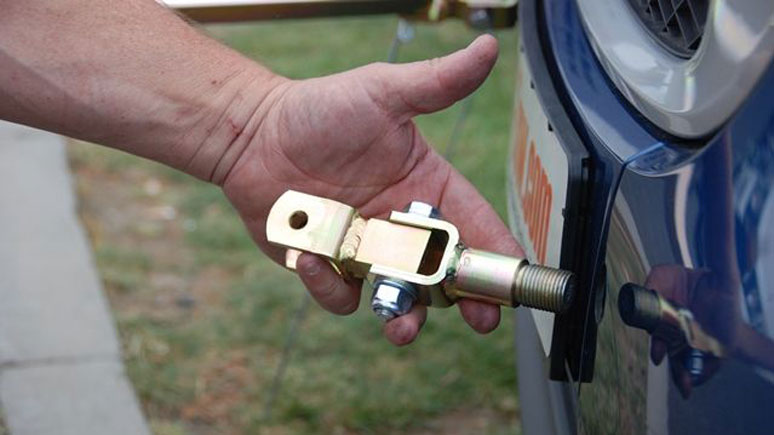 If you do go down the A-frame route, check your car can be towed, this will mean checking the handbook or contacting the maker directly. Some cars, especially automatics, hybrids and electric only vehicles, can have their drive system damaged by being towed. It's also necessary to consider what effect leaving the key in to override the steering lock will have on supplementary systems and battery life.

Also inform your insurance company for both the car and your motorhome and check it is happy with the arrangements, especially if you intend to use the outfit outside the UK. And remember, reversing with a small towed trailer is notoriously difficult, especially when it is out of sight. Using a rear view camera can be helpful. Such cameras are now readily available as an aftermarket accessory.

Kerbweight or Mass In Running Order (MIRO)
This is defined in European Directive 95/48/EC as - the mass of the vehicle with bodywork in running order (including coolant, oils fuel, tools spare wheel and driver)

If you're a member of the Club, you can contact our tech team to discuss your needs.