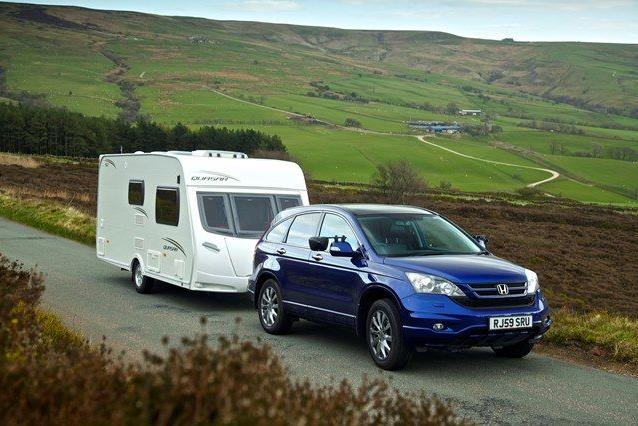 Matching your car and caravan

One of the most important things to do when you're considering buying a caravan - or changing your car if you have a caravan already - is to make sure your car will tow your unit comfortably.

On a practical level, a small car can physically tow a large caravan, but there are legal restrictions on the combination's you can drive on the road. You'll also find it easier to manage your outfit if you stick to certain car to caravan weight ratios, especially if you are new to towing. And if you're overtaken by an HGV on an exposed road on a windy day, even the most experienced driver will be glad he or she has stuck to a sensible ratio.

In this Data Sheet we look at how to find the best combination of car and caravan. If you are considering towing a folding camper, trailer tent or any other trailer, all the comments apply to your unit too, but we've used the term - caravan - throughout for convenience.

In general, it's best to use the heaviest, most powerful car to tow the lightest possible caravan. In the real world, however, many people consider the running costs of their cars as well as the purchase price, so are moving towards less powerful, more fuel-efficient engines even though they still wish to tow. Factor in the extra features that caravan manufactures are including in their units - meaning they are often heavier than in the past - and finding an acceptable match between your car and caravan is becoming more challenging.

There are four main figures to consider when matching a car to a caravan: the car's kerbweight, the car's towing limit, the car's Gross Train Weight (GTW) and the caravan's Maximum Technically Permissible Laden Mass (MTPLM).

The Camping and Caravanning Club, like many others in the industry, recommends you only tow a caravan that weighs 85 per cent or less of your car's kerbweight. Those who are experienced at towing may go up to 100 per cent of the car's kerbweight, but no-one should tow a caravan that is heavier than the towing limit of the vehicle it's behind. Legally, if you add together the Maximum Authorised Mass (MAM) of your car and the MTPLM of your caravan, the total weight must not exceed the GTW of the car.

Some of these figures will appear on the weight plates of your car and caravan. The others should be given in the handbook.

To help make this process easier the Club provides a free Towing Match Service tool for its members to use, details are available here. You will need to login to the Club website to access.

In a car, the weight plate is also known as the Vehicle Identification Number (VIN) plate and is often found under the bonnet or on the driver's door pillar. A caravan weight plate will probably be close to the entrance door.

The standard MTPLM figure for caravans given by manufacturers is calculated according to the British and European standard BS EN 1645. It's technically known as the MTPLM (Lower Limit) and in some cases this can be increased to the MTPLM (Upper Limit). This Upper Limit is based on the physical limits of the caravan itself, such as its chassis and axle limits.

If you have a suitable towcar and your driving licence allows it, our guide on driving licences has detailed information about the limitations of a licence, you can ask your caravan dealer to  - replate - the unit to the higher MTPLM with the resulting increase being the amount of luggage and other extras you can carry. It's important to do this because if you are challenged by the police or insurance company and questioned about the legality of your outfit, it's the figures given on the plates and accompanying documentation that will be used to validate your statement.

Why bother with the towing limit? 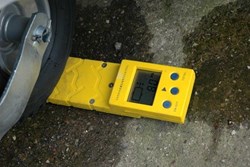 In most cases, the towing limit of your car will be significantly higher than its kerbweight, so you can use the kerbweight to calculate the best caravan match. However, in some modern vehicles - especially highly-optimised, fuel-efficient ones - the towing limit is lower than the kerbweight. In the words of the European regulation, a car's towing limit is the maximum weight at which: The motor vehicle towing a trailer must be able to start the vehicle combination - laden to its maximum mass - five times on an uphill gradient of at least 12 per cent within five minutes.

Apart from any legal and insurance implications, some hills in the UK are steeper than 12 per cent (1 in 8), so you'd be unwise to exceed the towing limits on a practical level.

It has become increasingly common for some car manufacturers to quote different towing limits for the same car, depending on whether or not it is carrying passengers. This can present an inflated towing limit that looks good on paper but is not comparable to other vehicles that don't use this method. It's therefore important to confirm the towing limit of your car in the situation you'll be using it. The limit should be given in your car's handbook, but you may need to contact the manufacturer if it's unclear.

Given the challenge of differing kerbweights, towing limits, payloads and the like it is difficult to predict the total weight of your car and caravan accurately.

To make sure you are keeping within sensible limits - and the legal GTW limit - it's best to weigh your car and caravan in the state you'll tow it.

You can do this with a portable weighing machine, such as the one pictured, or by taking your outfit to a weighbridge, where you can get its weight documented. Your local Trading Standards office can point you in the direction of your nearest weighbridge. 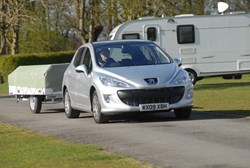 The difference between the Mass in Running Order (MIRO) and MTPLM of your caravan is known as its User Payload. This may be the weight of the extra things you can carry inside, but it's likely your circumstances will be different from the carefully specified ones used to calculate the figures so you'll need to consider your caravan loading with care.

If your caravan has a leisure battery installed or if you have items fitted to the caravan after it has left the factory, such as a motor mover, the weight of these items will need to come out of your User Payload. 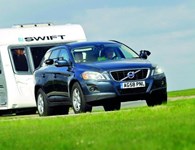 As a general guide, basic items for two people will weigh about 100kg, with an extra 25kg allowance for each additional person. However, if you carry several heavy security devices and an extra gas bottle, for example, it will eat into your payload. It's worth getting a rough idea of how much your luggage and extras will weigh before you load up the caravan. You may find some of the heavier items need to be carried in the car - though be careful not to overload that either.

The importance of your caravan's noseweight

Another important figure is your caravan's noseweight. This measures the downwards force put on the car's towball and it varies depending on how you load the caravan.

To keep your caravan as stable as possible on the road, you'll need to load it carefully (see "Loading your caravan", below). Excess weight in the rear of the caravan, for example, can cause the unit to act like a pendulum behind the car, causing it to be unstable or "snake". This can be uncomfortable and is potentially dangerous if it gets out of control.

When it's ready for the road, the caravan's noseweight should be as heavy as possible, but not exceed the car's towball limit or the caravan's own noseweight. Both are normally between 50kg and 100kg.

You can buy a noseweight gauge to check your unit's true noseweight before each trip or use a piece of wood (such as a section of broom handle) along with a set of bathroom scales to do the same job. 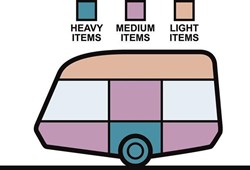 When you load your caravan, keep the items low down and as close to the axle as possible. In this diagram, the area in blue is the best place for heavy items such as an awning.

Medium weight items can be stored in the pink area while the rest of the caravan should only be used to store light items.

What does it mean?

Individual cars, caravans and trailers can weigh different amounts, depending on their specification and whether they are carrying a load or not. Unfortunately, there are no standard definitions for many vehicle weights (or masses, see below) but here are a few commonly quoted weights with their normal definitions.

If you have a scientific background and know the difference between mass and weight, please note that the industry assumes they mean the same thing, both being measured in kilogrammes (kg).

Changes to the MIRO 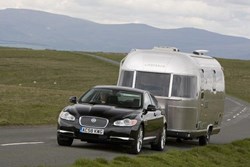 The definition of a caravan's Mass in Running Order (MIRO) has changed recently, to bring it in line with European Type Approval regulations introduced in 2012.
Caravans built after June 2010 with National Caravan Council (NCC) approval should conform to the new standard. In this case, the MIRO will include an allowance for a gas bottle, fresh water and toilet flush water, but no leisure battery.

In practical terms, a caravan built before June 2010 will appear to have an MIRO of about 50kg less than the same caravan built after that date. However, most people will find their real User Payload is different from that quoted in the handbook.

If your unit has a 10-litre freshwater tank, for example, and you always drain it before you travel you can add an extra 10kg (the weight of 10 litres of water) to your User Payload. But if you have a motormover fitted, this could reduce your Payload figure by as much as 40kg (the weight of the mover).

Note: Members can use the free Club Towing Match Service here. They can also contact the Club on 02476 475442 for a match.

The questions assume the caravan is braked. Very small caravans with an MTPLM of 750kg or less can be unbraked and come under slightly different regulations.

4. Is the MTPLM less than the kerbweight? Those who are used to towing may be confident to tow a heavier combination such as this. If so, go to question 5.

5. Is the MTPLM less than the towing limit of the car?

6. Is the car's towball limit suitable for the noseweight of the caravan?

7. Does my driving licence permit me to drive a combination such as this?

To find the maximum MTPLM of the caravan that can be towed under the 85 per cent recommendation, multiply the kerbweight of your car by 0.85.

You will probably want separate caravan insurance to cover the caravan itself against damage, fire and theft and this can also be provided by Club Care Insurance.

If you're a member of the Club, you can contact our tech team to discuss your needs.